From boyhood dream to reality

As he stood there, in front of the museum's characteristic octagonal tower, Harald Thomsen could think back to his boyhood dream of creating a natural history museum. A dream that arose when, as a six-year-old boy, he began his collecting career with an exhibition of conch shells he had received from his grandmother.

The dream became a reality over the years as the salary as a journalist and later editor made it possible for Harald to create a unique collection of stuffed animals. 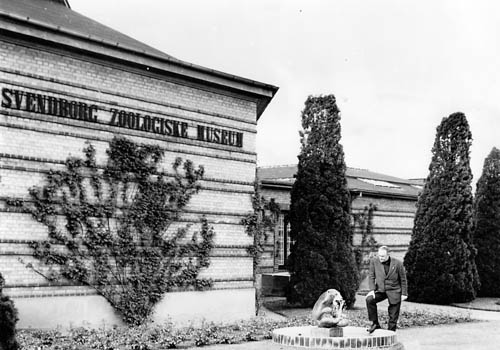 During a hunt in 1930, Harald Thomsen heard about a large collection of birds that the Count of Egeskov had stored at Fjellebroen. In 1934, Harald Thomsen succeeded in buying the bird collection from Count Ahlefeldt Laurvig, and this collection supplemented his own, so that Harald Thomsen got an almost complete collection of Danish birds and eggs in one fell swoop. Now Thomsen could realize his dream, and a unanimous city council in Svendborg backed the idea for Svendborg Zoological Museum and donated the building site to Harald Thomsen and guaranteed a loan for the construction.

It was a proud and happy Harald Thomsen, who on that June day in 1935 could see Svendborg's mayor Tønnesen cut the silk ribbon in front of the entrance. It was Harald Thomsen's vision to make zoology alive and interesting by constantly developing the museum. In the years leading up to his death in 1969, Harald Thomsen repeatedly expanded the museum's collection, which initially also included live animals: snakes, birds, fish and a single penguin! Peacocks strutted proudly around the property, and later a monkey house was built, where, among other things, the baboon Lasse ruled. But in the end, the noise from the animals became too much for the neighbors, so Harald Thomsen had to close the monkey house. Today, the museum's first buildings do not look like much in relation to the new Naturama, but there is still some of Thomsen's spirit left in the modern way Naturama brings nature to life - it's still about making dreams come true. 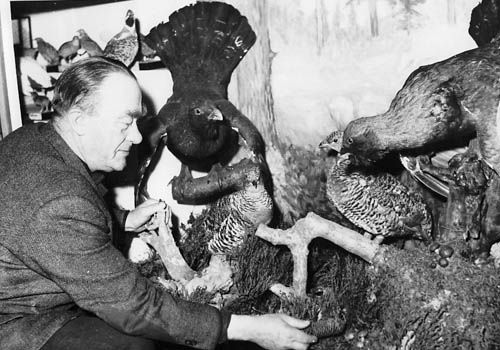 Svendborg Zoological Museum and Naturama are inextricably linked with the founder Harald Thomsen's person. But who was he, Harald Thomsen? Zoologist, collector, animal lover, merchant, editor, author, painter are just some of the titles we can put on Harald Thomsen. Svendborg Zoological Museum is of course Thomsen's greatest achievement and legacy, but he also wrote over 700 short stories and several crime novels, just as his work as an editor is still remembered. Harald Thomsen was a loner, an original, in the best sense of the word. His industriousness was legendary. Wearing a brown suit and plusfours, always in search of a new item for his collection and with a distinct commercial talent and thrift, he was a man who was told many stories and anecdotes around.

Harald Thomsen also liked to tell anecdotes himself, e.g. about that time, just after the museum opened, a young man came up the garden corridor to the museum with a rain owl dangling in his hand. He had shot it on South Funen, and now he wanted to sell it to the museum man. "But you do not get it for less than five kroner," said the young hunter to Thomsen, "because it must be rare." Thomsen gave him the five kroner, but at the garden gate the young man turned around and said "if I had not demanded the five kroner myself, you would probably have cheated me." "Then you would have received DKK 50", Thomsen replied, because the bird was an Ibis male, which is rarely seen in Denmark. 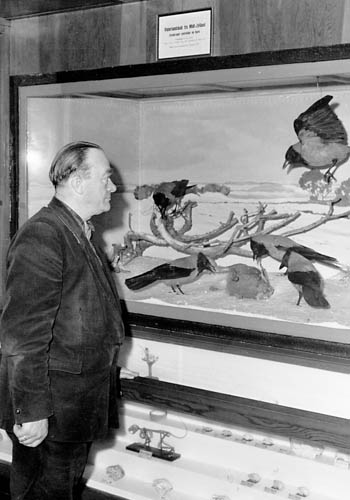 Harald Thomsen created an impressive collection of stuffed Danish animals, but in the museum's earliest years he also kept live animals, and among them he had some special exotic friends. One of Harald Thomsen's basic ideas with Svendborg Zoological Museum was to show the exhibited animals in natural surroundings. But in the museum's first year, he was not content with stuffed animals. Around Svendborg Zoological Museum lived i.a. monkeys and peacocks, while alligators and snakes lived inside. In the museum's first eleven years, the penguin Ping faithfully followed Harald Thomsen. Ping, who was as tame as a dog, was caught in 1934 at Jegindø in the Limfjord, probably escaped from a passing whaling boat. The little spectacled penguin lived behind the museum in a specially decorated house. Harald Thomsen sometimes read aloud on the radio, and here Ping was also present and gave samples of his singing talent for open microphone.

Another of Harald Thomsen's pets was an eight-meter-long strangler snake, which for a time lived side by side with alligator cubs in a showroom, where Harald Thomsen had also set up a large aquarium with 15,000 liters of water. Every day, Thomsen took out the snake and played snake taming in the private home. Once while Thomsen was standing with the choke hose wrapped around him, a stray museum guest suddenly entered the room. The snake was frightened and reacted by slinging around Thomsen. When a suffocating snake begins its killing maneuver, the muscles are locked so that it took several hours before a breathless Harald Thomsen could be released. But characteristic of Thomsen, his sympathy was entirely on the side of the snake. His only comment afterwards was: "the snake could not make the man an idiot!"